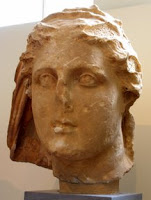 Several BSA students worked on Greek sculpture as their project. One of the key projects was undertaken by Guy Dickins who was invited to publish the sculptures from the sanctuary at Lykosoura in Arcadia. The site had been excavated by the Greek Archaeological Service under P. Kavvadias and the statues were found in the summer of 1889. The remains were quickly reported (by Charles Waldstein [see AJA 1890, pp. 209-10]) as the cult statues described by Pausanias (8.37.1-6) in the temple of Despoina. These colossal statues, created by Damophon of Messene, represented Despoina and Demeter, seated on a throne, with Artemis and Anytos alongside.

Of these statues, nearly all the fragments apparently have been recovered. There are over a hundred fragments, most of which have already been brought here, though not unpacked and not visible to the public, while some of the torsos were so large that they could not be transported on the roads that exist there. Special arrangements will be made for transporting them soon.

What Waldstein stressed was that this was the discovery of an original cult statue in situ.

Interest in Damophon was stirred by an article (1904) by Augustus M. Daniel, an associate student of the BSA, who restated a case for dating his work to the fourth century. Waldstein responded in a short note restating the case for a date in the early fourth century BCE. The case for a second century BCE date was presented by Ida Carleton Thallon (1906), who had been a student at ASCSA in 1899-901.

Dickins, a student of Percy Gardner, was admitted to the BSA in 1904/05 and started to work on Damophon (alongside his contribution to excavations in Laconia). During his second year at the BSA the Greek Government invited Dickins to ‘help in the re-erection of the colossal group at Lycosura’. At the annual meeting of the Hellenic Society in June 1908 it was reported that Dickins had reconstructed ‘out of unnumbered fragments, of the great group by Damophon of Messene … giving us for the first time satisfactory evidence in regard to monumental sculpture in Greece in the second century B.C.’ He continued this work on Damophon in the study of the sculptures in collections at Rome.