'Enough to satisfy the most ardent enthusiast for Greek ceramography' 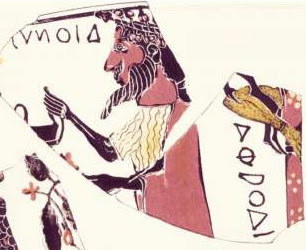 As students arrived at the BSA they were faced with quantities of unpublished pots and fragments from excavations, chance finds and old collections. As George C. Richards expressed it in relation to his study of fragments from the Athenian akropolis, there is ‘enough to satisfy the most ardent enthusiast for Greek ceramography’.

Richards had studied under Percy Gardner at Oxford, and went to Athens as Craven University Fellow (1889/90). He was invited to work on the fragments from the Akropolis Museum by Kavvadias, the Ephor of Antiquities; Jane Harrison had earlier worked on part of the same collection. The drawings were prepared by Gilliéron.

Richards was followed to Athens by Henry Stuart-Jones (best known for his work on the Greek Lexicon), also from Balliol, also influenced by Percy Gardner, and also holding a Craven University Fellowship. One of the pieces he studied was a red-figured cup in the National Museum found at Tanagra which carried the inscription Phintias epoiesen and this was discussed in a paper read to a meeting of the BSA in March 1891. However, as this cup was due to be published by P. Hartwig, Stuart-Jones changed the focus of his final version.

Eugénie Sellers published three white-ground lekythoi excavated at Eretria in 1888. Ernest Gardner, the director of the BSA, bought a further white-ground lekythos, said to be from Eretria, for the BSA’s collection in 1893. This type of pottery was to form the subject of research by the Cambridge-educated Robert Carr Bosanquet. He went to Athens in the spring of 1895 to work on Attic white ground lekythoi. In November of the same year he was in Dresden working on ‘the Athenian white-ground vases of he fifth century’, and the following month in Mannheim discussing his project with Adolph Furtwängler.

After the lecture I caught him in the passage—a German lecturer enters at a run, begins at once, and utters his last words as he bangs the door at the end—and explained that I was working at Lekythi and wanted to photograph some of his vases. He answered me … with a test question—I suppose they want to see whether one is only an amateur or serious. ‘Lekythi’ he said, ‘you have some interesting lekythi in the British Museum—the “Orestes” and the “Patroclus, Farewell” for instance.’ Now those are just the two about whose genuineness—at least as far as their inscriptions go—I have always had doubts. And F. is one of the most unerring—and, I must say, positive authorities on the question of forgeries, and I knew he had been in London lately—I saw him in the Museum—and must know the truth. So I plunged, sink or swim, and said I believed the inscriptions to be false. His whole face changed. All the fire in his eyes flashed up and he said—‘Ja! Ich halte die Beide für falsch’—then quiet and dry again—‘Sie können ruhig studieren und photographieren.’ So I was saved.

This research, that included a series of lekythoi from Eretria in the National Museum, was published in 1896. He published a further study based on a white-ground lekythos discovered at Eretria in 1889.

John H. Hopkinson, another student of Percy Gardner, went to Athens as Craven University Fellow in 1899/1900 to work on ‘the history of vase-painting’. He worked with John Baker-Penoyre, Keble College, on a study of the figure-decorated pottery of Melos. This had been prompted by the discovery of ‘Melian’ pottery in the Rheneia deposits in 1898. (Cecil Harcourt-Smith had also purchased a piece for the BSA’s collection.) This interest in pottery from the islands was continued by John L. Stokes, Pembroke College, Cambridge, who worked on Rhodian relief pithoi in 1903/04.

Economic issues were addressed by Gisela M.A. Richter in her study of the distribution of Attic pottery. She later worked on Protoattic pottery based on a new acquisition at the Metropolitan Museum of Art in New York. A further student to work on figure-decorated pottery was John P. Droop, Trinity College, Cambridge. He excavated in Laconia and became interested in the archaic Laconian ('Cyrenaic') pottery. The focus of his study were two Laconian cups: one said to have been found at Corinth and subsequently acquired by the Fitzwilliam Museum, and a second in the National Museum, Athens, which had been acquired on the Athenian market. Following further ‘stratified’ excavations at Sparta by the BSA Droop developed a chronological structure for this type of Laconian pottery. He further revised this scheme after the First World War.

There were two other Cambridge students working on figure-decorated pottery. Eustace M.W. Tillyard, who was admitted in 1911/12, was subsequently awarded a prize fellowship at Jesus College to work on the catalogue of the Hope Collection of Greek pottery. Evelyn Radford, Newnham College, Cambridge, was admitted to the BSA in 1913/14 and published a study on Euphronios.