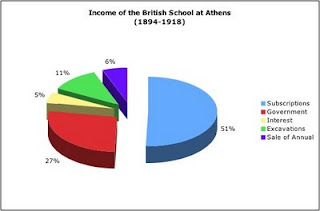 Cecil Harcourt-Smith helped to transform the finances of the BSA through the introduction of the annual Government Grant (£500) and the growth of subscriptions. Investments also formed a steady stream of income (and increased during the First World War). Money given specifically for excavations changed from year to year.