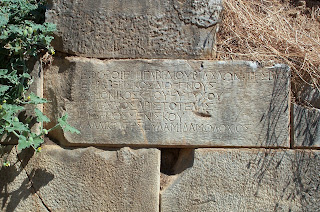 Ernest Stewart Roberts (1847-1912) was one of the significant influences on Cambridge students for the study of epigraphy. He was college lecturer in classics at Gonville & Caius (and later Master). One of his students was Ernest Gardner (1862-1939), the first student at and second director of the BSA. They later collaborated on Roberts' two volume Introduction to Greek Epigraphy (1887-1905).

Gardner had published the Greek inscriptions from Petrie's excavations at Naukratis as well as studies of Cockerell's notes on Greek inscriptions. Henry J.W. Tillyard (1881-1968) was also a student at Caius. He was admitted to the BSA as assistant librarian (1904/05) and took part in the work in Laconia publishing the inscriptions from Geraki and Sparta (1906, 1907).

Alan Wace (and Maurice Thompson) published a Latin inscription of the reign of Trajan that they had noted in Macedonia. However they seemed to have passed their notes on inscriptions to Oxford-trained Marcus N. Tod and Arthur M. Woodward.