The Ptolemaic Base of Arsinoe-Methana 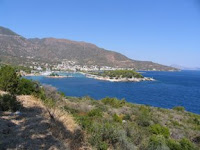 An overview of the Ptolemaic occupation of the Methana peninsula in the Peloponnese has now appeared. Discussion includes the fortified naval base on the Nissaki as well as the topographical features of the isthmus connecting the peninsula with the Troezenia (and featuring in a number of border disputes known from inscriptions recovered from Epidauros). Methana, renamed Arsinoe, was one of a series of Ptolemaic bases in the Aegean.

This study builds on the earlier BSA / Liverpool University survey of the peninsula.

Image
The fortified naval base on the Nissaki. © David Gill.
Posted by David Gill at 09:36