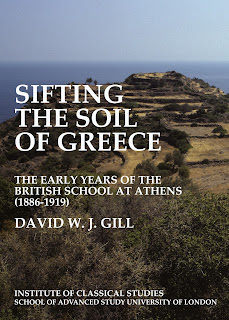 Sifting the Soil of Greece is now listed on WorldCat.
Posted by David Gill at 09:39 No comments:

I will be contributing "Excavating under Gunfire: Archaeologists in the Aegean during the First World War" to the day workshop "Archaeology and Cultural Heritage Protection in Wartime: Contemporary and Historical Perspectives" in Swansea. It develops Chapter 13 of Sifting the Soil of Greece, "Students at War".

One of the topics will be the work of British and French archaeologists to record the archaeological remains and to preserve the finds during the campaign in Macedonia. French archaeologists formed part of the Service Archéologique de l'Armée d'Orient. They had gained expertise working on the site of Elaious at Gallipoli, a site that attracted gunfire from the Turkish forces.

The British work in Macedonia was initially led by Lt-Commander Ernest Gardner RNVR, a former director of the BSA and also Yates Professor Archaeology in the University of London. Gardner was one of several former BSA students operating with Naval Intelligence in Salonica (EMSIB).

For further details about Sifting the Soil of Greece see here.
Posted by David Gill at 21:31 No comments: