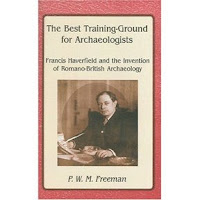 Phil Freeman was written a wonderfully detailed study of Francis Haverfield (1860-1919). In the section on Haverfield's 'associates', Freeman notes the strong link with Robert Carr Bosanquet (1871-1935), of Rock Hall, near Alnwick, Northumberland. Apart from being Director of the BSA, Bosanquet excavated at Housesteads on Hadrian's Wall, and later in Wales when he held the chair of classical archaeology at Liverpool.

Freeman notes the close link between the two (especially over the work in Wales) but comments (p. 414):

How and when Bosanquet came into contact with Haverfield again is not known. ... their association has to go back to Haverfield's work around Hadrian's Wall, where Bosanquet was born and later farmed.

The answer probably lies in Thomas Hodgkin (1831-1913) who had close links with Haverfield through the Society of Antiquaries of Newcastle upon Tyne. Both were involved with the excavations at Corbridge (along with Haverfield's student Leonard Cheesman (1884-1915), who was subsequently admitted to the BSA).

In July 1902 Bosanquet married Ellen Sophia (1875-1965), Hodgkin's daughter, who had read modern history at Somerville College, Oxford. She recalled her frequent visits to Hadrian's Wall as a child:

From Chollerford you could start with the Roman Camp at Chesters and go to all the other camps along the Wall, especially dear Borcovicus (Housesteads). We went on this drive so often that Chapman said the horses drew up of their own accord when we came to the right halt for a camp or a view. And so even as children we became familiar with theories of vallum and milecastles.

The Hodgkins lived in rural Northumberland first at Bamburgh, and then at Barmoor Castle. Ellen mentioned the Bosanquets at social functions. Indeed, around 1892, she remembered meeting Bosanquet, then at Trinity College, Cambridge, on a walking-tour of the Wall with Ellen's brother Edward (also at Trinity).

Tellingly Ellen refers to Bosanquet's Oxford 'cronies' (in the autumn of 1902) but does not identify them. One was likely to have been Haverfield.