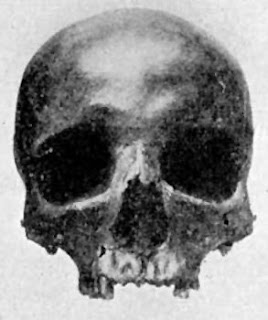 Human and animal remains from excavations of the Cretan Exploration Fund were send to Professor William Boyd Dawkins (1837-1929) of Manchester University. Boyd Dawkins was a friend of Evans and was invited to Knossos. He had worked on cave deposits in England, notably Wookey Hole and Cresswell Crags, and was thus a natural choice to advise Hogarth for the interpretation of animal remains from the Dictaean Cave. He also made comments on the skulls found during Hogarth's excavations at Kato Zakro.

Bosanquet wrote about the human remains from Palaikastro:

Old C---'s [presumably Charles Comyn] fondness for skulls is notorious; to-day he packed 13 of them in two large mule-paniers and sent them off to the Museum at Candia, hoping they may arrive there in time to be measured and reported on by Body-Dawkins. B.-D. is the author of a sporting book on 'Cave-hunting,' and what he doesn't know about bones isn't worth knowing. Also he's a pal of Evans', and is coming to Cnossos to stay with E. [April 21, 1902]

The following season Wynfrid L.H. Duckworth, Cambridge university lecturer in physical anthropology, joined the team to work on the remains found in the ossuaries. As he was a qualified medical doctor (St Bartholomew's Hospital in London) he was able to meet the medical needs of the local community.

Duckworth has a lot of doctoring to do and is very good and patient. Our drugs, sufficient for my modest practice, aren't enough for his, but that's just as well, for we have no business to take the place of the local doctors and chemists by a too wholesale distribution of medicines. [March 28, 1903]

Charles H. Hawes of Trinity College, Cambridge, joined the project in 1905 to continue this work.

Image
Skull from Zakro.
Posted by David Gill at 12:13