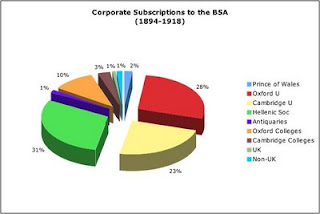 The re-organisation of the BSA under Cecil Harcourt-Smith brought about an increase in the amount of money attracted from corporate bodies. This income represented around 51% of the total subscriptions for the BSA during this period. The Rules and Regulations stated:

VI. A corporate body subscribing not less than £ 50 a year, for a term of years, shall, during that term, have the right to nominate a member of the Managing Committee.

The BSA was regularly supported by a subscription of £5.5.0 from the Society of Antiquaries of London, and £25 from HRH the Prince of Wales (and after he became King).